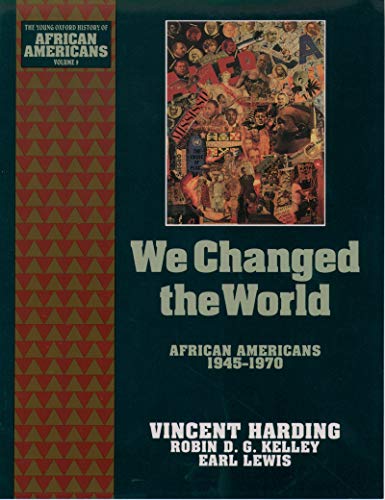 For all of the continuity of African-American history, including the long history of struggle, the years between 1945 and 1970 represented a new moment. It was a time of new possibilities and new vision, a time when black Americans were determined to be the architects of an inclusive America that championed human rights for all. In We Changed the World, Vincent Harding, himself a participant in the Southern freedom movement, documents what was perhaps the most critical chapter in African-American history, the fight for civil and human rights.
In the streets and in the courts, a new generation of black activists--including Rosa Parks, Martin Luther King, Jr., Malcolm X, writers James Baldwin and Ralph Ellison, and baseball legend Jackie Robinson--forced the federal government to admit that segregation was wrong and must be remedied. Their efforts paid off. In the 1954 Brown v. Board of Education decision, the Supreme Court overturned Plessy v. Ferguson, the 1896 decision upholding legal segregation. Americans could no longer easily avoid the implications of Martin Luther King, Jr.'s central message: "If democracy is to live segregation must die." By 1964, African Americans had much to be optimistic about. Protests in Birmingham and Mississippi and the much publicized murders of civil rights activists forced Congress to pass the Civil Rights Act of 1964, which outlawed segregation in public accommodations of every kind throughout the country.
The civil rights movement freed all African Americans to move beyond protest and to take charge themselves. The Black Power movement, the Voting Rights Act of 1965, the urban rebellions--all contributed to the transformation of American politics and the role of black Americans in the life of the nation. African Americans did indeed change the world, but only after a long struggle that began when the first Africans arrived in this country. It is a struggle that continues to this day.